Officers from the Nigerian police, assault and attempt kidnap of Pan Africanist Toyin Agbetu after he observes them with his camera stopping motorists and taking cash.

The writer and pan African human rights activist Toyin Agbetu was assaulted by Nigerian police after observing them take cash from innocent motorists alongside Ipaja Road, Egbeda, Lagos (22 January 2010). An officer assaulted the writer and film maker, later threatening and interrogating him in the back of their van. An attempt was made to kidnap Agbetu in order to ‘teach him’ a lesson after they could not find pictures of their actions on his camera. Agbetu who was in Nigeria working with unemployed young people on a journalism and documentary making course had travelled to Nigeria as part of the community project - Development Impact for Nigeria (DIFN). It is a genuine grassroots based organisation that facilitates and supports Africans in the Diaspora returning home to contribute to Africa’s maldevelopment and help offset effects of the Continents ‘brain drain’.

Agbetu was one of a group of several volunteers based in the UK, all donating their time and skills for no cost in order to help the people of Nigeria. This was not the first time he has volunteered doing work in Africa. In 2009 Agbetu spent a month volunteering at Matthew 25 House for HIV orphans and Saint Dominic’s Hospital in Akwatia, one of the largest hospital in Ghana helping rebuild its IT infrastructure through a similar project run by the African Development Association for Progress (ADAP) organisation. 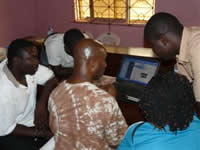 Agbetu was only saved from serious injury after Yomi Oloko, head of DIFN, caught up with the officers after chasing them down the road in car and on foot and directly challenged the legality of the operation taking place. Following his intervention and refusal to pay any financial incentive, Agbetu’s property including his wallet, identification cards and camera were returned intact with nothing missing. Oloko then suggested that the officers involved in the assault apologise at which point a senior officer embraced Agbetu and whispered in his ear that he would send his children to the classes next day in order to ‘study’.

Agbetu then entered the car of his colleagues and was driven away. He continued the journalism and film making class with his young students who were grateful for his safe return and determined to make a difference for the future of Nigeria.

Speaking on the issue Agbetu said; “I thank the Ancestors I am still alive to meet my family and friends, I also am in much respect of the integrity and passion of all those involved in DIFN and the Ipaja community project. Thankfully there are still many officers who serve Nigeria with dignity and honesty, but we must be forever vigilant and loyal to the Truth - for when police turn armed robber, who is left to protect the people? The next generation must not repeat the mistakes of some of their elders,” 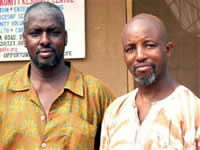 Why does progressive change seem so slow in Nigeria?

Thankfully there are still many officers who serve Nigeria with dignity and honesty, but we must be forever vigilant and loyal to the Truth and our community, for when police turn armed robber, who is left to protect the people?